Some of you who have followed me for a while know that I used to highlight WIP excerpts on Fridays. However, I’ve noticed a lot of other bloggers who post fiction pieces that they’ve read on Fridays. I thought it would be fun to pick up on this trend.

I recently read a lovely book called Waterfalls by Robin Jones Gunn. This is the same author who wrote the Christy Miller series. (Wait, what are you talking about?) It’s just a YA christian fiction series I read sometime in Jr High and it stuck with me, i thoroughly enjoyed it. It’s awfully girly but hey, I love those kinds of books so… 🙂

Meredith’s job takes her to Glenbrooke where she meets the only man who has ever made her heart leap: Jacob Wilde. Trouble is, after their first few encounters, his heart doesn’t seem to be leaping toward hers.
When Jacob approaches a large publishing house with a series of books he’s written he discovers that Meredith, the acquisitions editor, is the woman he needs to impress. Meredith is more than willing to let him work at it.
Find out what happens when Jacob sees Meri in a different light and suddenly is the one who is starstruck.

Well written, if a bit wordy sometimes. I prefer sometimes to know what the 2nd MC (usually the male) is thinking, but a single Point of view book is not unheard of in romance and I have read plenty. I enjoyed the mystery of not knowing what Jake was actually thinking, and interpreting from his actions only. Anyhow both characters were interesting and likeable, and Meredith was quite mature for her age actually. For a book published in 2004, a character in 2004, she seemed rather old fashioned, which was part of her charm.

Other than the fact that the love story took a long time to get going, I enjoyed this book. There was more focus on the family relationship between Meredith and her sister and her parents than romance, but all in all, it was still a good read. 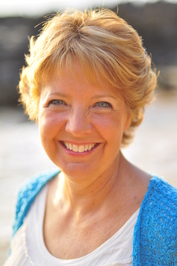 ROBIN JONES GUNN is the much loved author of over 90 books with more than 5 million copies of her titles sold worldwide. Her Father Christmas books are a Hallmark Original movie. Her popular Christy Miller series now continues in Christy & Todd: The Married Years. Robin’s novels and non-fiction works have received multiple awards and are a favorite with book clubs and study groups. Robin and her husband have a grown son and daughter and live in Hawaii.