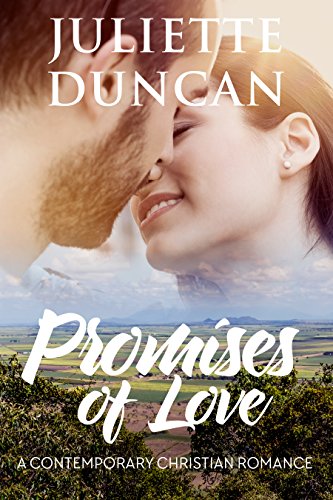 When Harrison, a charming, handsome veterinarian surgeon proposes to Zoe, a promising medical student, on Christmas Day, she’s over the moon and in love. Less than two days later, she wonders if she’s made a mistake.

Zoe had been ignoring God, but when her heart is stirred and her faith is rekindled, she’s faced with an impossible decision.
An unplanned trip to Zoe’s family in drought-stricken rural Queensland provides more challenges when she discovers her parents may lose their family property within a matter of weeks.

There was a time when Harrison refused to speak to his parents, but all that has changed, and all he wants now is a family of his own. Losing Zoe to Spencer Coleman, the dashing Royal Flying Doctor Pilot who flies off with Zoe and her Grandma on an emergency flight to the city, is his worst nightmare.

Zoe and Harrison’s journey to the altar is not certain. She’s made two promises – which one can she keep? Or can she keep both?

Both Harrison and Zoe were depicted in a very realistic manner, with romantic longings, future plans for their lives, and deeply-rooted beliefs; in the case of Harrison, a deeply rooted belief that God isn’t relevant. When Zoe’s faith is rekindled, personal and relationship priorities shift, and it rocks their once-steady plan. I love when characters’ emotional issues interfere with the plans they have for themselves. Conflict (emotional and physical) makes for a great story.

I enjoyed the spiritual journey embarked on by each character as they also had to deal with financial issues, and a major wildfire to boot, but the ending was too tidy for me. I really wanted to see more of Harrison’s POV. And we didn’t see his POV until well into the book. All we saw was Zoe’s. I think his change of heart was too easily accomplished, and that’s partly due to the reader not being inside his POV. If the author had chosen to speak from his POV while he encountered a spiritual epiphany as it were, I think the ending would have been much more believable.

Promises of Love is a well-written romance with cute characters and a good story. If you like christian romance, you’ll enjoy this. (Also – I adore this cover. So much!)