It is my hope that you truly focus on the positive today. My mom taught me at a young age that Valentine’s Day is not just about romantic love, but about showing love to friends and family. She gave us gifts every year, and it was sweet. If you have friends, children, parents, relatives, show them you love them today!

I have a treat for you all! An excerpt from my debut Christian Romance novel, When Hearts Collide! Why am I sharing with you today? Because it’s Valentine’s Day! Actually, there’s more than one purpose.

This excerpt, in fact, this entire chapter initially, was boring. (pst. Most first drafts are horrible things)

So as I’m writing my book, I scrabbled out a scene about Valentine’s Day. Here’s the problem: In my first few drafts, this entire chapter was totally and utterly boring. How many times has there been a novel, short story, or a movie, where you see two people having a picnic by the lake, or the river, or in the park on Valentine’s Day? How many times have you said to yourself, “Can you get any more cliche?”

(How many of you have actually had a picnic on Valentine’s Day? “Raises hand”)

Okay, just because I’ve done it, doesn’t make it not boring. Because of it’s overuse, that’s why it’s so cliche.

But, oh! how I wanted to keep this totally romantic scene….cue deep heavy girlish sigh. 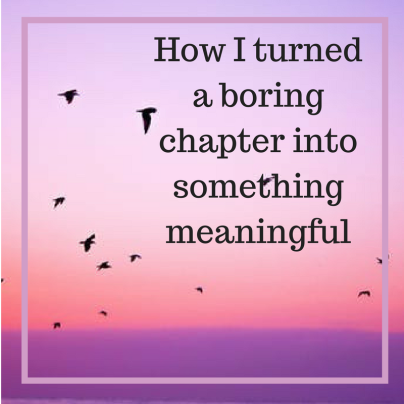 I had to change it somehow. I didn’t want to cut it (although I could – but I won’t, unless someone gives me a very, very good reason.). Instead, I chose to make this scene mean something in the overall arc of the story.

How did I do that?  By giving the date more purpose than just “romantic affect” Every scene in a story has to connect and should be important to the overall story.

Step 1. Use what I already had established. Jay has a secret. Lacey has a secret. Step 2. Make the scene move the story along. This might sound so ordinarily obvious to some of you writers, but for a new-ish one like me, this really does take some getting used to.

In this scene, I gave Jay a significant object to share with Lacey, but sharing it with her is risky business and he’s a little terrified. This scene isn’t just about romance. It’s about the characters’ backstories; it’s a turning point in their relationship, so it’s also a stepping stone toward the future of their relationship.

From boring, blah, cliche – to pivotal, emotion packed. Took me like 12 drafts, just so you know.

Here, for you, my dear friends and readers, is a little snippet of Lacey and Jay’s Valentine’s Day Date.

Jay held a hand to the side of her face, letting her hair brush over his skin and waited a moment before he continued with what he had been trying to explain. “After I met Matt and found Christ, he really motivated me to want to make a better life for myself in every way possible. So I made this list.” He swallowed and clamped his mouth shut. Too much rambling could lead to disaster. He was already treading across thin ice bringing up his past at all.

Lacey studied the list, which spanned a few pages. After reading the first page, she glanced up at him with a grin. “We’ve done most of these things together.” A gust of wind blew through her hair. He reached his hand up and ran fingers through it, twirling the wavy strands until they wrapped around his fingers. “You never did any of these things when you were younger? Not even with foster families?”

He readjusted, sitting upright again. “I never had the money to take girls out to ice cream, or restaurants. I didn’t hang out with that kind of crowd anyway. If I went out, it was to a party to get drunk…”

He pushed back the acid-like feelings of disgust. He hated thinking about the old him, the old way of life. I am a new creation in Christ.

“What about when you worked? During high school?”

He exhaled slowly, carefully, an itching fear climbing up his spine. “All that money went to my brother.”

Her gaze looked doubtful and curious—much too curious. He clamped his mouth shut again, lest he carry on a bigger lie. This was not why he had brought the notebook to show her.

What, did you think she wouldn’t have questions for you?

With a mental fist, he pounded down the doubts, pushed the notebook aside and cradled her in his arms. That fresh, familiar, ever-present scent of coffee mingled with the smell of earth, floated around them. “Every date we’ve been on means the world to me. Not just because I am finally experiencing new things in life, but because I get to experience life with you.”