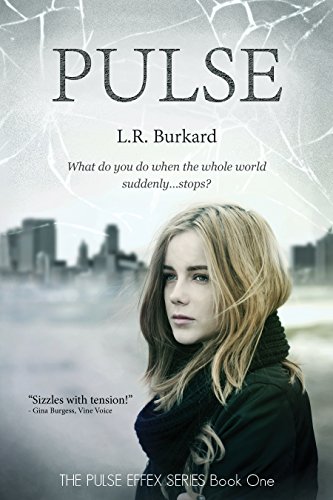 Andrea, Lexie and Sarah are just ordinary teens–until a mysterious event causes all electronics to fail. In the dead of winter, there’s no heat, internet, or cell phones—not even a stinking working car. In this chilling Christian YA tale, most of the population doesn’t survive. Pitting faith and grit against a world without power, the girls and their families must beat the odds. But can they find the strength to survive when society collapses and technology fails?

Told in journal-style prose by three 16 year old girls, PULSE takes readers into a heart-pounding future for America, while affirming the power of faith in the darkest of times.

I really wanted to like this book. I actually love the premise immensely and thought about doing my own dystopian with a similar premise someday. Problem is, 1, the YA market is overrun with dystopians and I feel as if it’s a fading subgenre. 2, I’ve also noticed a lot of novels with this very specific dystopian subgenre of an EMP blast creating havoc on the U.S. or the world in general. So – probably a no go for my own rendition. Anyway, on with the review.

Unfortunately, I found 2 of the characters so stereotypical that they didn’t hold my interest. The only fascinating character who held my interest was Sarah. Her previous life before the EMP was slightly more relatable to mine. Also, her transformation, the change in her, was so much stronger than that of the other two girls. Lexie came from a family of ‘preppers’ , people who prep for disasters of this nature, so she displayed very little growth, in my opinion. Andrea’s growth was only so-so, but I could see it building and possibly the 2nd book would reveal more growth in her. Part of the problem was neither one of these two girls experienced as much hardship as Sarah, who’s situation was far, far worse than theirs.

Sarah’s growth was tremendous. Beginning as a nervous girl with anxiety disorder who relied on medication and had a love-hate relationship with her older brother, Sarah transformed into a strong woman no longer dependent on medication, who relies on and respects her older brother, despite her initial disdain of him. As I mentioned, her situation after the EMP was significantly dire compared to the others’ situations.

I’m not a fan of books where the story is told through journal entries. I’ve read several and every time I come to the same conclusion. I”m not a fan. But because I love YA dystopians, I chose to read it anyway. I do want to applaud the author for actually telling readers that this book was written in that format though. I just find journal entries to be too descriptive, passive, and drawn out, and basically all ‘telling’.  You’re not in the action as a reader, you’re reading about something that already happened. I just don’t like it and that isn’t to say that other readers may enjoy stories in this format. It’s just my preference.

Also I felt there were way, way too many political references to one side that were unnecessary and bias. Of course, some readers don’t care about this. Some readers would probably agree with this author’s perceptions and it wouldn’t bother them. Some readers would be offended. I wasn’t exactly offended, I was more annoyed.

I’m not entirely sure if I would recommend this book. If you like YA dystopians, yes, I think you’d enjoy it because of the backdrop of an EMP blackout. However, if you’re not into YA dystopians, then you wouldn’t like it. I think the writing could have been slightly improved upon. I think the characters could have been greatly improved upon. For me, this was a disappointing read.