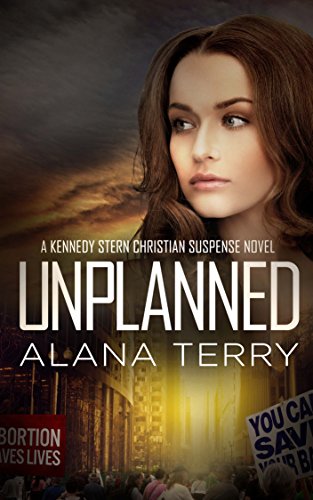 When missionary kid Kennedy Stern volunteers at a local pregnancy center, she has no idea a mysterious phone call is about to change her life …

Her first day on the job, Kennedy meets a girl who’s far too young to be pregnant.

A girl Kennedy will risk everything to rescue … whether she wants to or not.

How far would you go to save a life?

Unplanned was not a book I “planned” on reading  (too much? haha!) I knew there was very little romantic element. I’ve had this book on my kindle for a long time, (I have an addiction to free books and it was free when I picked it up long ago). But I only read it because I read another book by Alana Terry before this, which sparked my renewed interest in Terry’s novels. (hey at least I’m honest)

I enjoyed Kennedy as a character and loved the deep POV, how the author really gave us a sense of everything Kennedy felt, heard, saw, etc. The tension she felt as she began to realize that she was being dragged into something much bigger than just trying to help out a little teen girl who was pregnant, The little girl was very well-crafted for a teen character. Terrified, timid, and rightly so.

I’ve read a handful of suspense novels, but I much prefer a romantic thread to be embedded. I’m picky that way. Anyhow, I found the first few chapters to be extremely slow, but once I read through those (because I don’t skim. Unless it’s an epic fantasy. Even then, I really don’t like skimming), the story began to pick up and the suspense and tension ramped up. Overall, it was a well-crafted story full of suspense, addressing tough topics that I haven’t seen being addressed by Christian authors. Great read.

It’s a bit gruesome just so you’re aware and it may ruffle your political and religious feathers, if you’re easily offended. Otherwise, for the well-crafted characters, the tension and suspense, I do recommend this story.